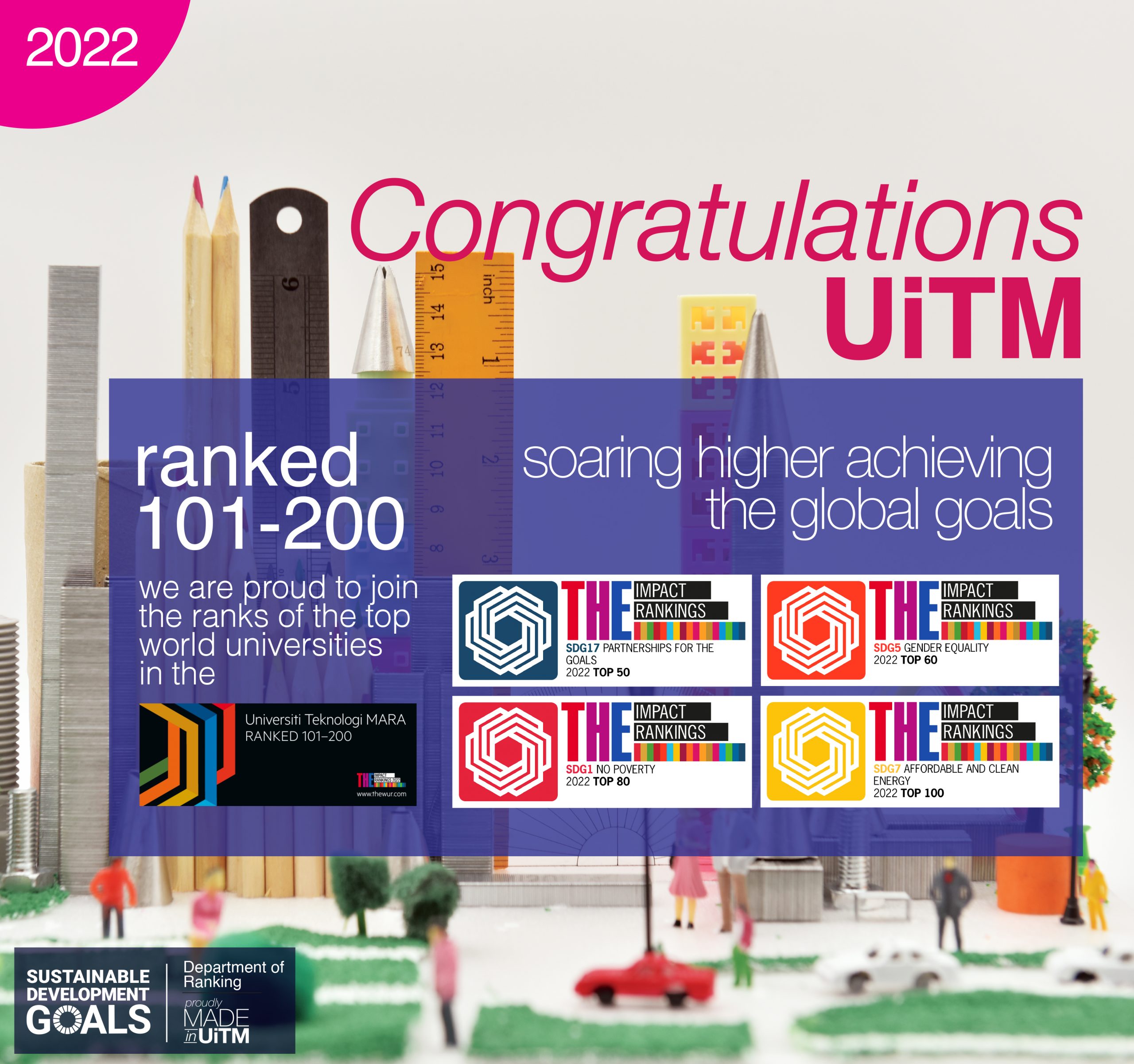 SHAH ALAM, 28 APRIL 2022 – Universiti Teknologi MARA (UiTM) underscored its proactive role in upholding the United Nations’ Sustainable Development Goals (SDGs) as it is now the 2nd highest ranked university in Malaysia on sustainability in the Times Higher Education (THE) Impact Rankings 2022 with an overall score of 82.8 from 79.4 last year. UiTM also jumped six spots for the compulsory goal of SDG17 (Partnerships for the Goals), ranking at 42 out of 1,524 participating institutions from 48th spot last year after the university achieved a cumulative score of 94.8 from last year’s score of 89.6.

The THE Impact Rankings measure the success of institutions in delivering the United Nations’ 17 SDGs based on impacts to communities. Institutions are ranked based on the compulsory goal of achieving SDG17 along with the results of their best three remaining SDGs. UiTM’s high achievement in SDG17 underlines the university’s commitment to developing relationships with countries, regional NGOs and government agencies for SDG policy development, conducting research to develop partnerships and support for SDGs, as well as curating education around SDGs for students and the public.

For SDG7 and SDG9, UiTM showed marked improvement in ranking, indicating the headways the university has made in energy efficiency, reduced energy consumption and divestment policy in its energy usage, as well as its ability to produce spin-off companies and generate income based on research and innovations. For SDG6 and SDG10, UiTM managed to retain its ranking from last year. Such achievements ensure UiTM maintained its highly strategic position as one of the top 101-200 institutions out of 1,406 ranked institutions across 110 participating territories worldwide.

UiTM Vice-Chancellor, Professor Datuk Ts.  Dr Hajah Roziah Mohd Janor, who has long been an instrumental figure in positioning UiTM’s various ranking initiatives, expressed her appreciation for the dedication and commitment of the UiTM fraternity for the wellbeing of the nation. “The THE Impact Rankings measure the direct impact that a university makes. As a university, we are extremely proud of our efforts to highlight UiTM’s global role in supporting the United Nations’ SDGs and that we have been recognised at such a reputable, international level with other universities across the world for the third year running,” she said.