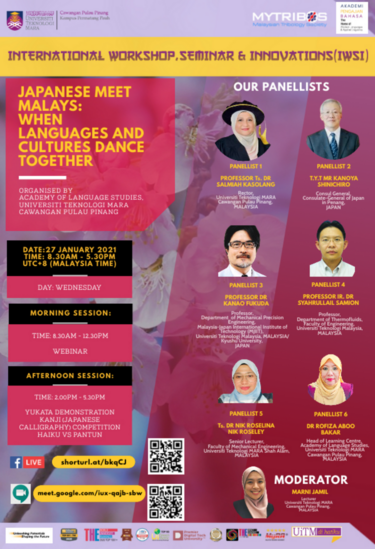 The webinar commenced with an uplifting speech on Colours of Language by Professor Ts. Dr. Salmiah Kasolang, the rector of UiTMCPP and the president of the Malaysian Tribology Society (MYTRIBOS) who touched on diverse Malay and Japanese cultural aspects while stressing that language is knowledge, and it adds colours to human lives.

Your Excellency Mr. Kanoya Shinichiro from Consulate-general of Japan in Penang proceeded to feature numerous aspects of Japan including its regions, initiatives implementation in Japan, cultural project collaborations to introduce Japan in Malaysia, and tertiary education opportunities for Malaysians in Japan.

The following panellist, Professor Dr. Kanao from the Department of Mechanical Precision Engineering, Malaysia-Japan International Institute of Technology, Universiti Teknologi Malaysia who is also a Guest Professor at Kyushu University, Japan shared his insightful perspectives in terms of engineering and cultural aspects in Malaysia and Japan as well as collaboration through shared expertise, and knowledge sharing between Malaysia and Japan towards a prosperous society.

Professor Ir. Dr. Syahrullail Samion from the Department of Thermofluids, Faculty of Engineering, Universiti Teknologi Malaysia who completed his undergraduate and post-graduate studies in Japan mentioned fascinating similarities and differences between Malay and Japanese languages in terms of sentence structure, meaning, content and context. The senpai (先輩) and kōhai (後輩) mentor system at education and work levels, and the simplicity elements in technology and work culture were also discussed.

The final panellist, Dr. Rofiza Aboo Bakar from the Academy of Language Studies, UiTMCPP who participated in the Youth Exchange Programme in Katsushika, Tokyo in 2003 focused on the remarkable origins, characteristics, and close affinities between Malays and Japanese in exploring their languages and cultures.

The webinar ended with a question-and-answer session by the moderators, Ms. Marni Jamil and Ms. Jihan Johari from UiTMCPP.

The afternoon session proceeded with three interactive online segments on Malay and Japanese cultures as Ms. Emi Yamazaki, the President of the Pink Hibiscus Club awed the participants with an easy-to-follow Yukata demonstration, which was followed by Kanji (Japanese calligraphy) and Haiku vs Pantun competitions hosted by the committee.

IWSI reached more than 3000 views and it has established educational and social connections between academicians and non-academicians across languages and cultures besides uplifting the spirit of collaboration through global exposure in the borderless world. The webinar can be viewed via https://www.youtube.com/watch?v=KRE0_oZ5z7E .