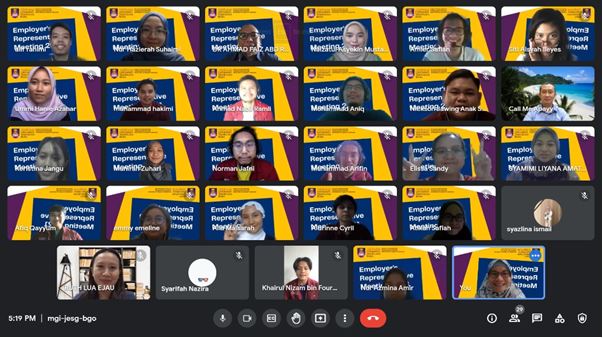 This programme aims to get feedback from employers on the performance of our graduates and improvement in terms of teaching and learning mainly for the Diploma and Degree programme. The first session was a discussion on the comments from the employer’s representative, which was led by the programme coordinator, Sr Dr Asmah Alia Mohd Bohari. The second session consisted of breakout sessions for final-year degree and diploma students. The employer’s representative was invited to share their experiences with the students on the actual industry experiences, led by five moderators, Sr Dr Noraziah Wahi, Dr Sylvia Gala Mong, Sr Awang Ihsan Awang Yunus, Sr Mohd Khairul Fitri, and Roseline Ikau.

The department received positive feedbacks from employer representatives, with the majority of the representatives stating that the graduates working in their organisation presented themselves effectively and could function independently in the sector. Some feedback needs to be addressed by the departments being discussed to enhance and pave the way for better performance and outcome from Jabatan Ukur Bahan UiTM Cawangan Sarawak.